Hasung as a professional precious metal coin minting solution provider, has built several coins making lines around the world. The coin weight ranges from 0.6g to 1kg gold with round, square, and octagon shapes. Other metals are also available like silver and copper.

You can bank with Hasung to offer you a one-stop solution for the coin minting line. The manufacturing package includes on-site guidance, coin minting equipment, and engineers to help you scale through the process. Our engineers have been involved in gold coin making process research and have served as technical consultants for major well-known mint.

Hasung concentrates on solving the coin minting problems while offering step-by-step instructions on precious metals. For 20+ years we have been at the forefront of gold and silver coin making machines, we have a professional and meticulous engineering service, on-site training, and technical support. 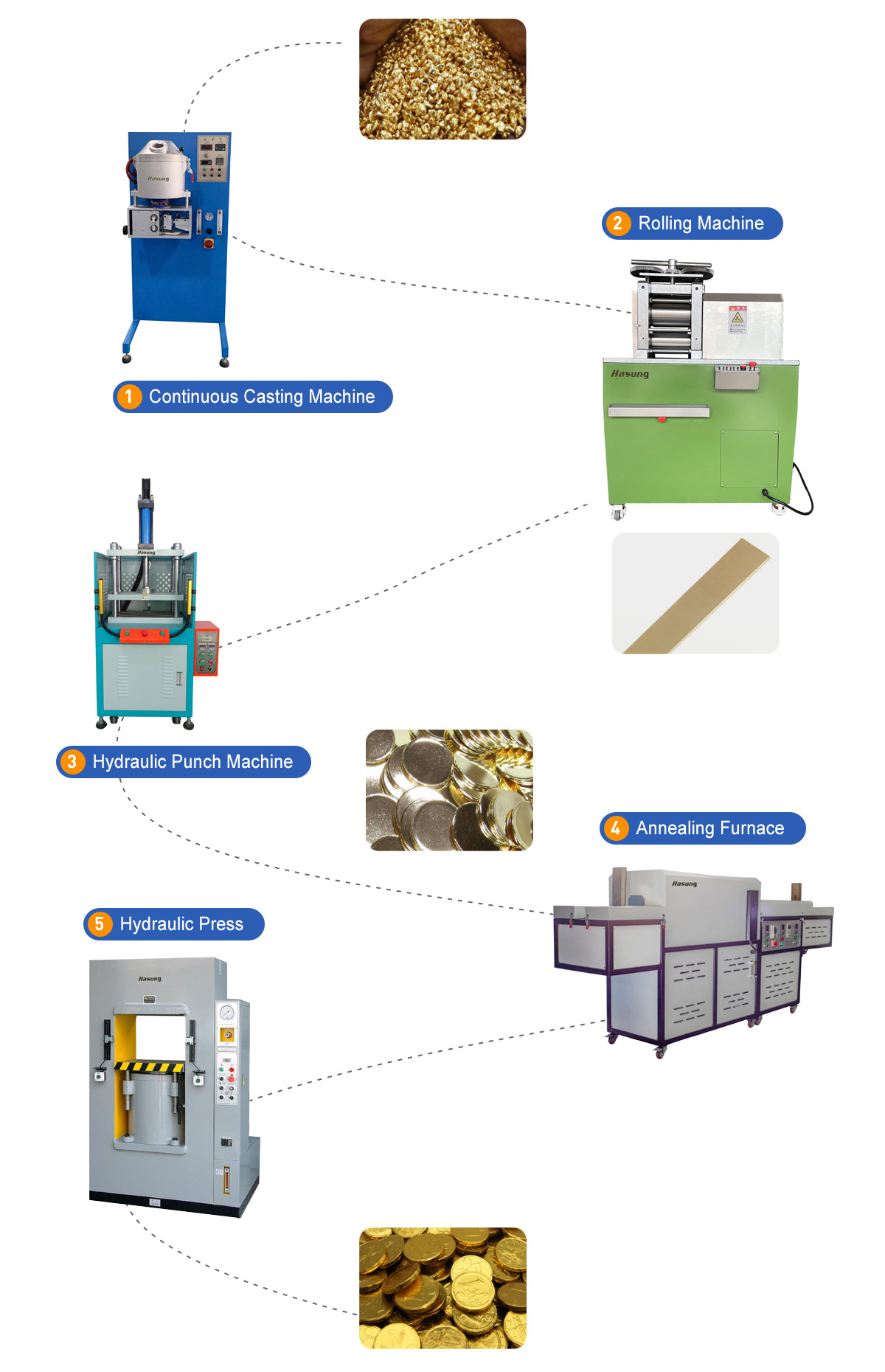 How Are Coins Made?

The methods used to make coins have evolved over the years. Coins were first made in the ancient kingdom of Lydia well over two thousand years ago. The minting process for ancient coins was quite simple. First, a small lump of gold, silver, or copper was placed on a coin die embedded into a solid surface like a rock. The worker would then take a second coin die, place it on top, and strike it with a large hammer.

Medieval mints used preformed round discs of metal and a screw press to manufacture the coins. Although this was a manual process, it was easier and yielded a more consistent quality than the ancient minting process.

Modern coins are minted with hydraulic coining presses that automatically feed the blanks into the machine. When the machine is running at full capacity, the press can make over 600 coins per minute. This speed is necessary for an operation like the United States Mint, which must produce billions of coins every year.

Although the process is complicated because of the automation used to produce billions of coins, there are a few common steps that every mint worldwide uses. The United States Mint is the largest mint globally, and we will focus on its production process.

The minting process begins with the mining of raw materials. Mines from across the United States and worldwide supply gold, silver, copper, or other required metals. The raw metal obtained from these mines contains impurities that are not acceptable for coinage.

In addition to mining ore to obtain the required metal, the United States Mint also uses recycled metal reclaimed from various sources. These sources include coins that are no longer "machinable" and are removed from circulation. Instead, they are returned to the mint, where they are recycled into new coins.

2. Refining, Melting, and Casting
The raw metal is refined to remove almost all impurities. Some coins require an alloy of two or more different types of metals. The refined metal is melted, and the different metals as required by the specifications are added. For example, the United States Mint makes its five-cent coin from 75 percent copper and 25 percent nickel alloy.

Once the appropriate purity or alloy is achieved, the metal is cast into an ingot. These are large metal bars that contain the proper amount of metal as required by the mint. The metal is checked throughout the process to make sure a suitable purity is obtained.

3. Rolling
The process of rolling the ingot to the proper thickness can be long and laborious. The ingot is rolled between two hardened steel rollers that are continuously moving closer and closer together. This process will continue until the ingot is rolled into a metal strip that is the proper thickness for the coin being made. Additionally, the rolling process softens the metal and changes the molecular structure which allows it to be struck easier and produces higher quality coins.

4. Blanking
The United States Mint uses rolls of metal that are approximately 13 inches wide and weigh several thousand pounds. The roll of metal is unwound and flattened to remove the curvature from the manufacturing process. It is then passed through a machine that punches out discs of metal that are now the proper thickness and diameter for the coin being made.

6. Annealing and Cleaning
The mint then passes the coin blanks through in the annealing oven to soften the metal in preparation for striking. The blanks are then put through a chemical bath to remove any oil and dirt that may be on the surface of the coin. Any foreign material can become embedded in the coin during the striking process, and it would have to be scrapped.

7. Upsetting
To protect the design that’s going to be impressed on the metal coin blank, each coin blank is passed through a machine that has a set of rollers that get a little bit smaller and imparts a raised metal rim on both sides of the coin blank. This process also helps ensure that the coin blank is the proper diameter so it will strike up properly in the coining press. After this process, the coin blank is now called a planchet.

8. Stamping or Striking
Now that the planchets have been properly prepared, softened, and cleaned, they are now ready for striking. Business struck coins are automatically fed into the coining press at a rate that can reach several hundred coins per minute. Proof coins made for collectors are fed by hand into the coining press and receive at least two strikes per coin. 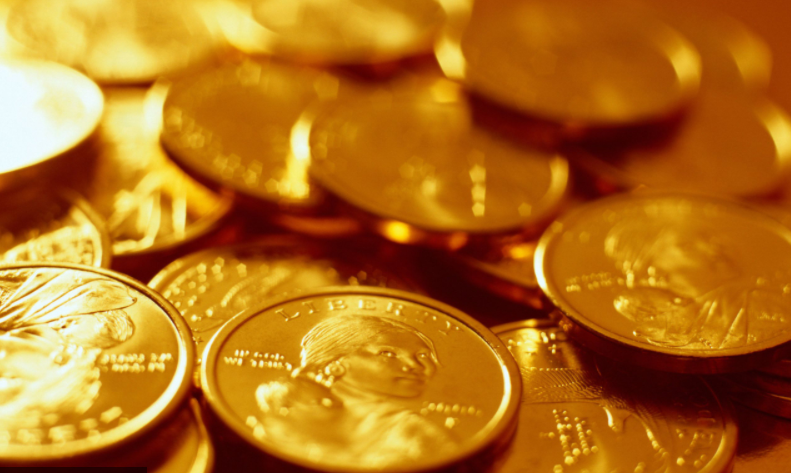 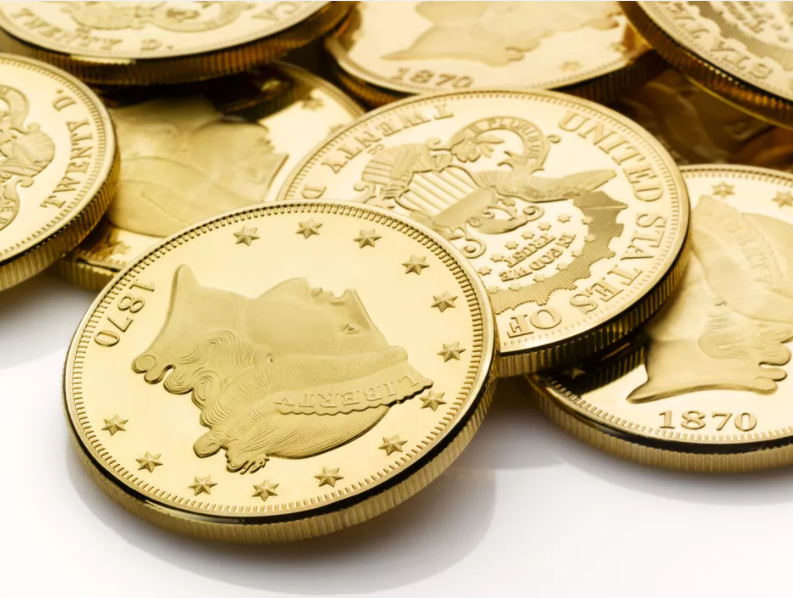 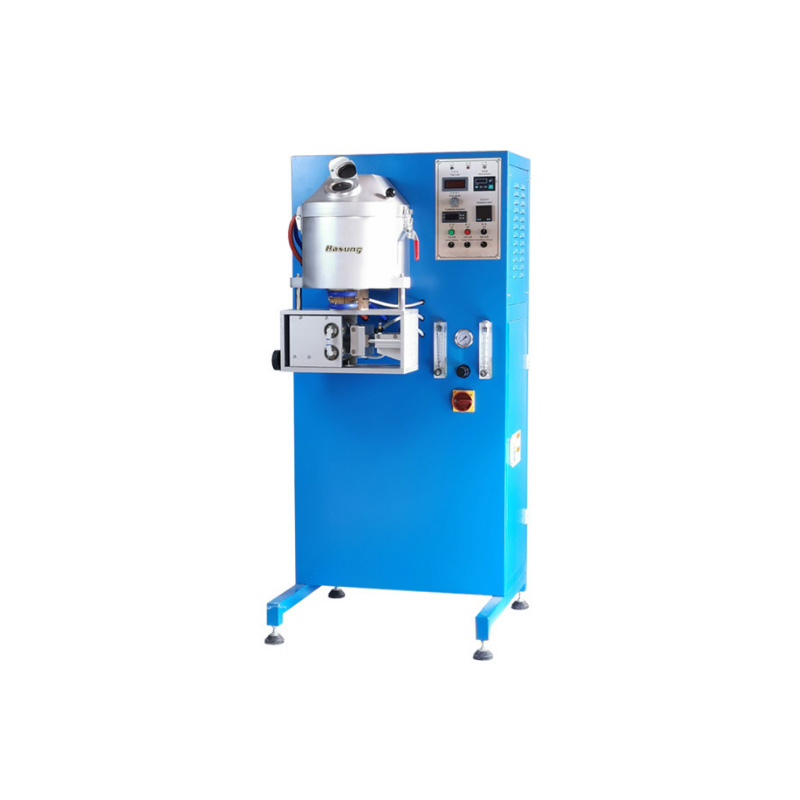 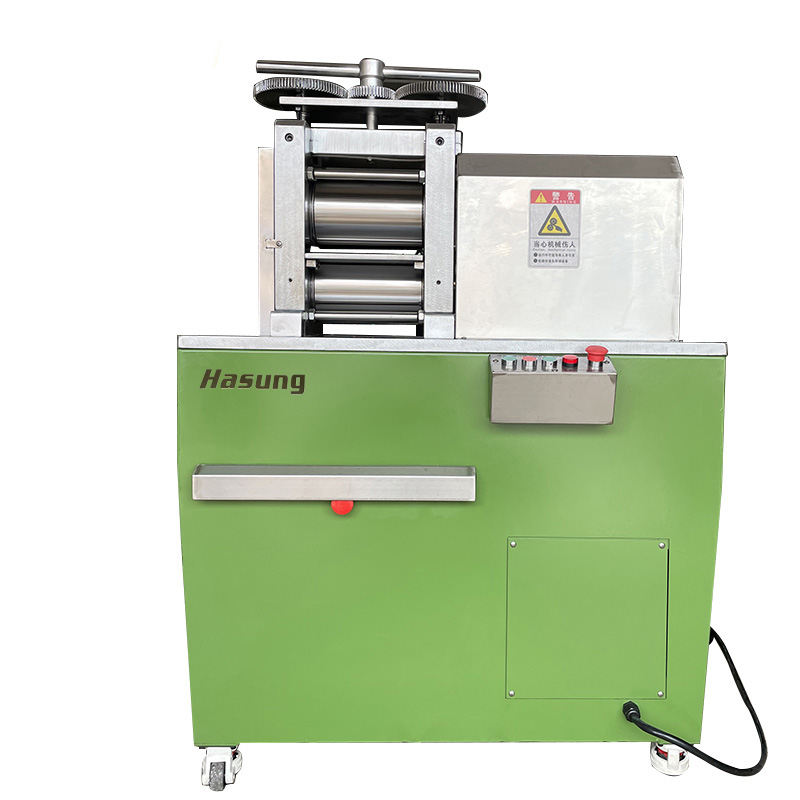 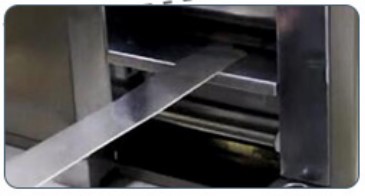 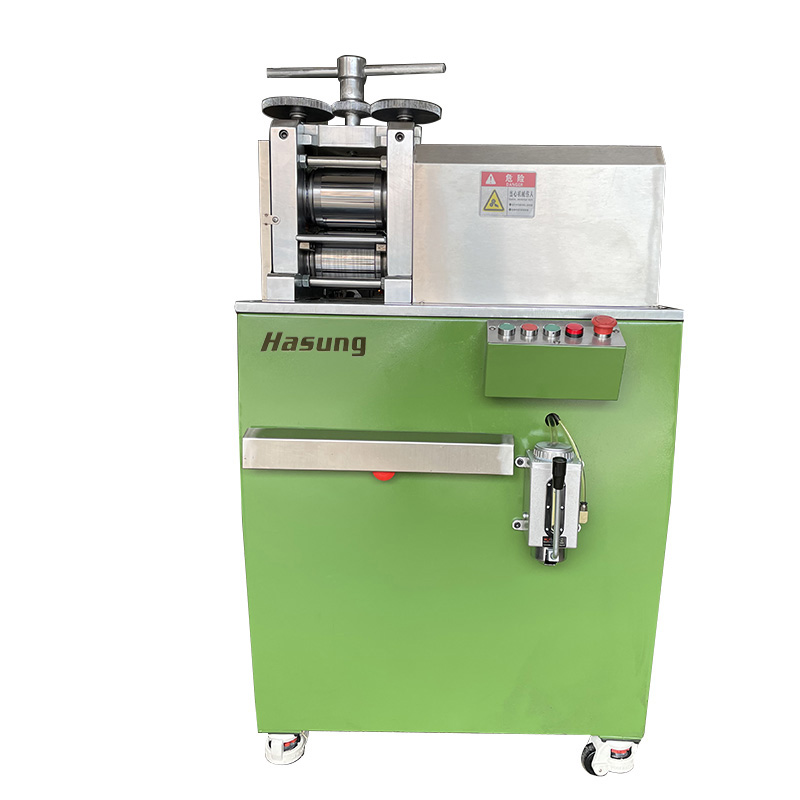 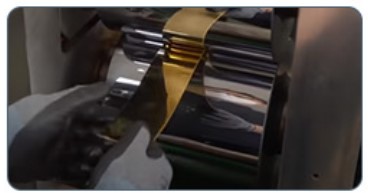 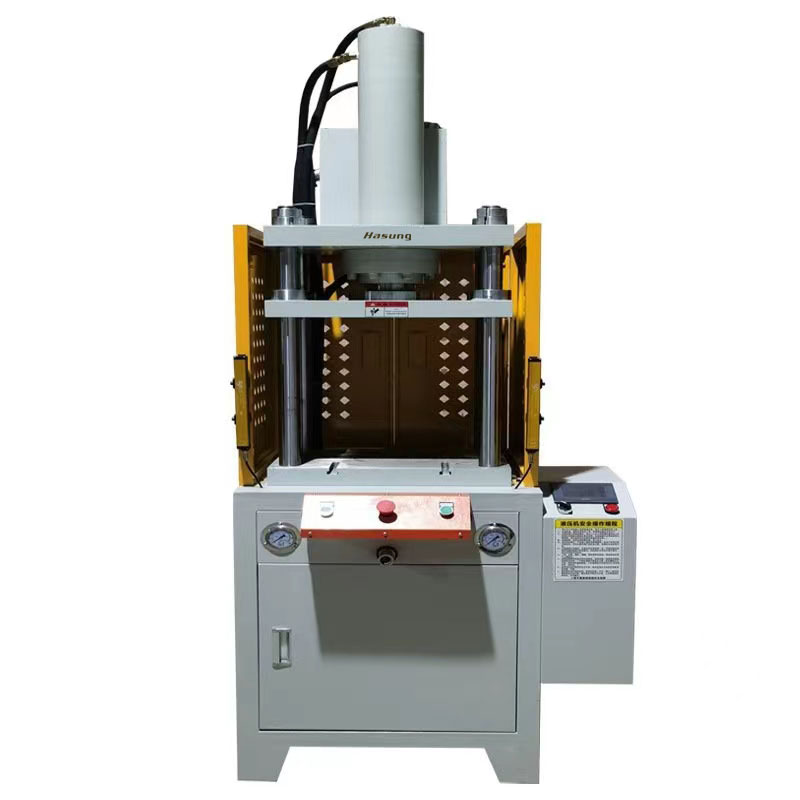 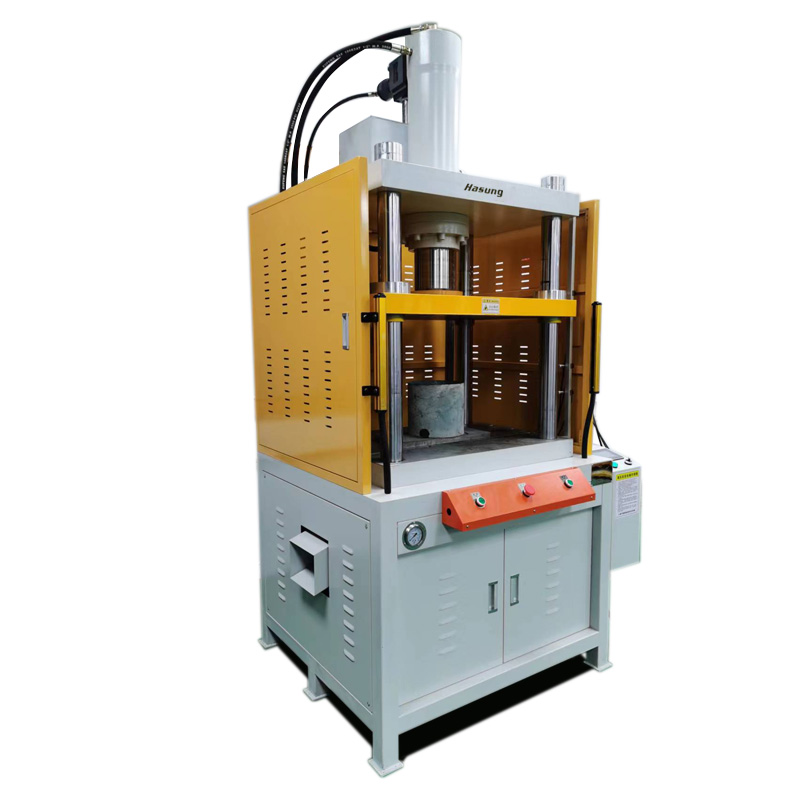 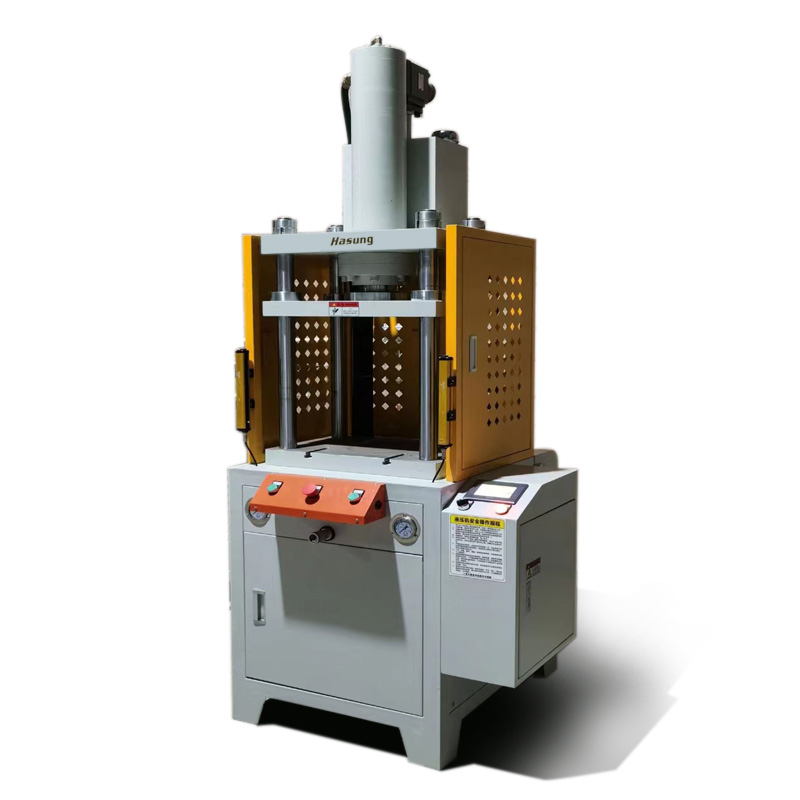 These hydraulic cutting press cuts the gold and silver blanks sheet which is processed after rolling. Blank sheet is cut out into desired shaped into round, rectangular, pendant shaped etc. Providing through cutting dies process after which blanks are ready to be minted into hydraulic stamping press.

Cut the blanks in clear edges for better results,

Equipped with a blanking trough device, it is convenient to collect materials. 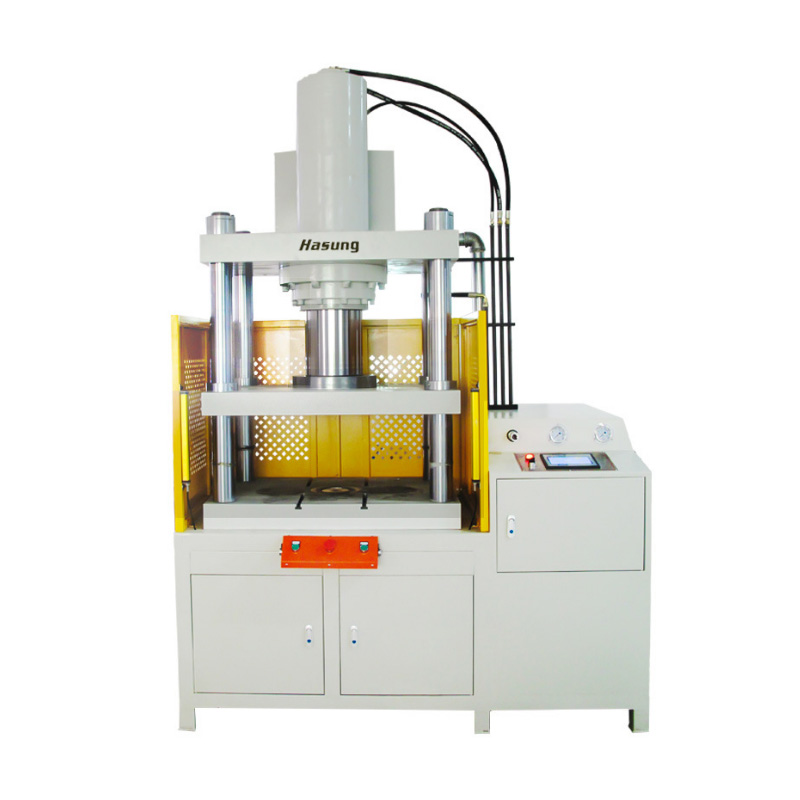 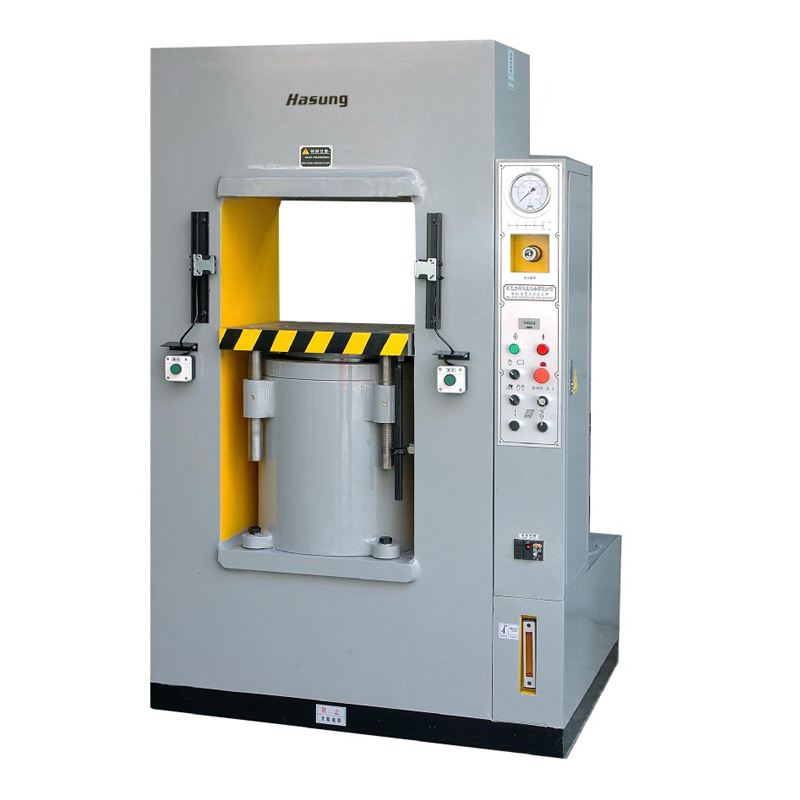 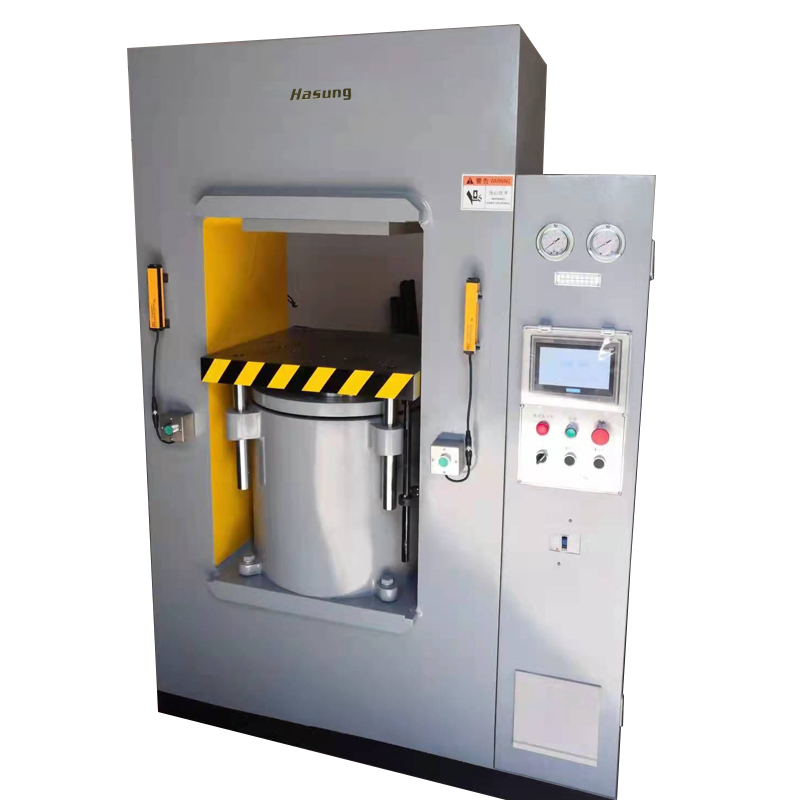 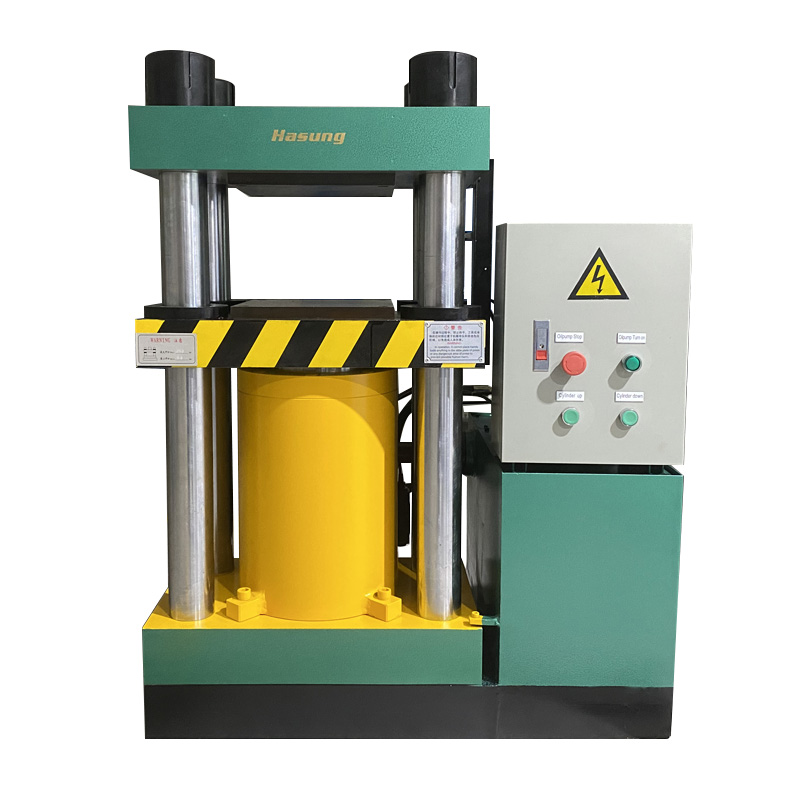 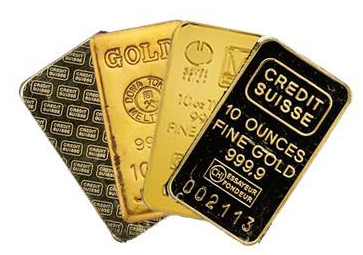 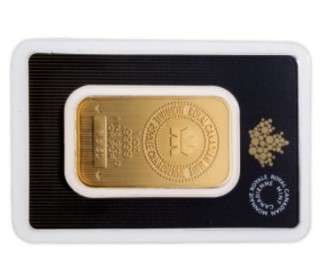 150 tons hydraulic coin embossing press suitable for making coins upto 50 grams in silver. The press is suitable for operation in manual as well as single cycle automatic operation mode. It is available with auto coin ejecting mechanisum. The press can be supplied in various tonnage capacity like 80 tons, 100 tons, 150 tons, 200 tons as per your requirement.

300 tons capacity hydraulic coin press machine for gold and silver complete with programmable PLC controller for multiple strokes at final stage. The press is equipped with ejector cylinder for auto ejection of coin for easy removal without hammering. This feature offers better final finish of the coin. This hydraulic coining press is suitable for making gold and silver coins from 1.0 gram to 100.0 grams in weight and is powered by 10.0 HP (7.5KW) electricals and is supplied complete with suitable electricals and control panel. This coining press design incorporates pressure adjustment control with timer to adjust final pressure time before return stroke. It can be operated by push button control as well as in automatic single cycle mode.

You can bank with Hasung to offer you a one-stop solution for the coin minting line. The manufacturing package includes on-site guidance, coin minting equipment, and engineers to help you scale through the process. Our engineers have been involved in gold coin making process research and have served as technical consultants for major well-known mint.

Hasung concentrates on solving the coin minting problems while offering step-by-step instructions on precious metals. For 20+ years we have been at the forefront of gold and silver coin making machines, we have a professional and meticulous engineering service, on-site training, and technical support Our Services. 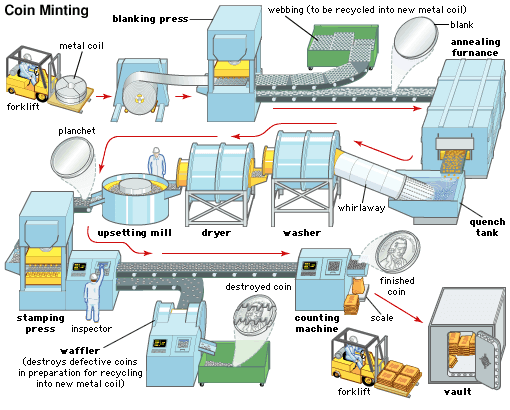